So. On to the demons associated with Ksárul and Grugánu. I've been putting this off, in part because I had other things on my plate, and in part because things get more difficult at this point. It's not that there are no patterns to discern here, but the patterns become more diffuse. Gone are the widespread, obvious expressions of affiliation that we saw with Sárku (the "Bákte in Death" and "Worm Triumphant"), with Hrü'ü (the "Errant Chusétl"), and even with Dlamélish (the "Mouth-over-Mouth" and "Barbed Staff"). Instead, with the name-glyphs of Ksárul's allies we see affiliation expressed more subtly, with diverse elements that vary greatly in execution, that in no case are found in the majority of glyphs, and that are not combined in patterned ways. It is as though the ancient mages that composed these glyphs were coy, tentative, and uncertain about the true allegiances of these demons.

The "Three-Barred Box" or "Blue Room" Motif, Highlighted in Red


The most common shared element, although it is only found in five glyphs (those of Chéssa, Héssa, Húrsha, Njénü, and Giritlén), consists of a more-or-less rectangular device defined by three slender vertical lines, which I will refer to as the "three-barred box." In two glyphs (Chéssa and Héssa), two such "boxes" are stacked, one atop the other. In two others (Húrsha and Giritlén), the "boxes" have no tops and the "lines" are less clearly-defined, but I believe these glyphs nevertheless quote or reference the same "three-barred box" motif. A sixth glyph, that of Uní, also displays three very short vertical lines in the lower register, and this too may be a very truncated version of the "three-barred box," although I am uncertain of this. I am also uncertain what the "three-barred box" motif is supposed to depict. It may depict the catafalque upon which the Doomed Prince lies dreaming. Or (more likely in my opinion) it may depict the hanging azure draperies (or aurora) which surrounds the Blue Room in which He is imprisoned. In either case, I suspect it broadly represents the Blue Room as a whole.

The "Half-Lidded Eyes," "Drooping Mouth," and Associated Elements of the "Dreaming Chusétl" Motif


A second element, visible in the name-glyphs of Húrsha, Erbulé, and Mi'royél, is a pair of crescents arrayed side-by-side. This element resembles a pair of eyes, and it recalls the "wide-opened eyes" we saw in the demons affiliated with Lord Hrü'ü except that the bottoms of the "eyes" are missing. As a result, these "half-lidded eyes" now have a rather different quality, and appear somnolent rather than alert. I propose that the "half-lidded eyes" also represent the Chusétl, the Shadow-Self of dreams and visions, but that in this form they represent the "Dreaming Chusétl," or "Chusétl in Repose," a reference to the sleeping Doomed Prince.

In all three cases, curling emanations emerge from the right-hand side of the "half-lidded eyes" and arch over them to extend to the left. Once again, I suggest that these represent exudations or manifestations of power by the "Dreaming Chusétl," again a reference to the powers of the sleeping Lord Ksárul. It is interesting that unlike the emanations from Hrü'ü's "Errant Chusétl," these emerge initially from the hidden right (the "back-side" in scripts read from the right) before moving "forward" to the left. These emanations may therefore reflect Ksárul's penchant for secrecy and surprise. Perhaps we could even call them "ambush emanations." Two glyphs (Erbulé, and Mi'royél) exhibit a second emanation that curls downward, beneath the "eyes," but remains to the right.

In the glyphs for Húrsha and Erbulé (but not Mi'royél), the "half-lidded eyes" are underlain by a wide, drooping "mouth." Although it is only present in these two glyphs, both of these demons have the strongest and clearest affiliation with Ksárul, and I firmly believe that the "drooping mouth" is somehow a part of the overall "Dreaming Chusétl" motif. Actually, it is not entirely true that the "drooping mouth" is limited to these two demons: we also see it in the name-glyph of the major demon Marássu (see previous post). In fact, Marássu's glyph displays all of the elements of the "Dreaming Chusétl" motif: the "half-lidded eyes," the "drooping mouth," and both the upturned and downturned "ambush emanations" emerging from the right. While Marássu is known to be "friendly" to Ksárul, his glyph suggests a much stronger affiliation than that.

Two other elements should be addressed. Again, neither appears in very many glyphs, and yet both do appear to be associated with the demons allied with Ksárul, and rarely appear elsewhere.

The "Trumpet" Motif, Highlighted in Red


One of these elements is the "trumpet" motif, composed of one or more triangular forms flaring widely toward the left. "Trumpet" elements of various sorts are recognizable in the glyphs for Erbulé, Mi'royél, and Mishomúu. As to what these elements depict, it is possible that they do indeed depict trumpets or some other variety of sound-producing instrument. It is interesting in this regard that the "trumpet" motif is characteristic of the glyph of the demon Ó. Lord Ó has no identified affiliation with Ksárul or with any other deity, but he is titled "He Who Echoes Between the Planes," and is described as "a breath of sound which is not sound." We may guess that the "trumpet" motif pertains in some way to vibration, resonance, and interplanetary energies. Beyond that, it is hard to say what it might signify, in terms of the theology and mythos of Lord Ksárul: the clarion that summoned His forces at Dórmoron Plain? The final key that will stir the Doomed Prince from His slumber? Something other, signifying his dreaming insinuation between the Planes? We can only guess.

The "Claw of Grugánu" Motif, Highlighted in Red


The final element, and possibly the most iffy, is a curling taloned- claw device that we see, in quite different forms, in the glyphs of Mishomúu, the major demon Ge'én, and possibly Húrsha as well. This element is perhaps clearest in the glyph for Ge'én, where it is a free-standing element consisting of a four-taloned claw and forearm (or foreleg). In Mishomúu's glyph, a three-taloned claw emerges from the "Trumpet" motif, and in Húrsha's, a three-, four-, or even five-taloned claw extends from the "three-barred box." This should be a fairly obvious expression of alliance with Grugánu, although it is noteworthy that none of the demons that display the "Claw of Grugánu" element have a specific affinity with Grugánu (as opposed to His Master, Ksárul).
Posted by Principe dell'Estria at 2:06 PM 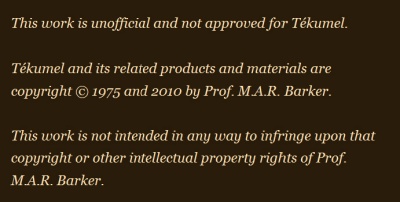 The text and illustrations posted in this blog are fan fiction / fan history / fan ethnography only. They are not canon Tékumel 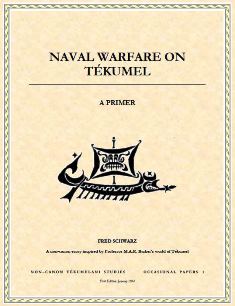